The Battle Between Hemp And Cotton: Which Is Best 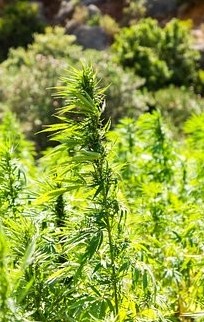 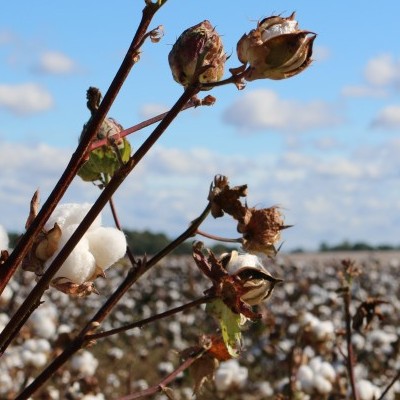 I have no intentions on bashing cotton, as I find it to be a very useful fiber. But the question still remains, is hemp better than cotton? From the research that I have done, I found the answer to be yes, in my opinion.

Why the battle, why not just fair competition? Well, industrial hemp is a superior plant to cotton, so it is not really “fair” so to speak. While cotton has many great attributes, hemp’s attributes are far better in many areas, some are shown in the graph below. 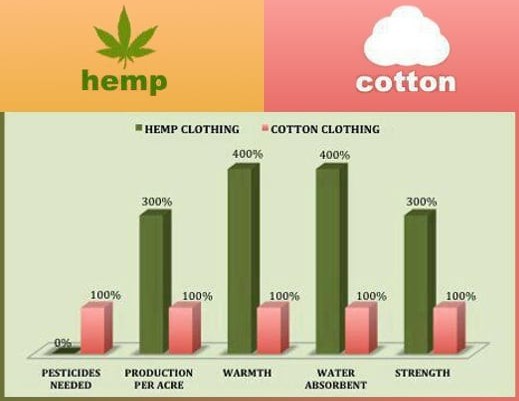 Why There Hasn’t Been Competition Between Hemp and Cotton

Industrial hemp was grown in the United States as a major cash crop well before the introduction of cotton. Our first settlers were mandated to grow hemp for the Royal Crown. Then they began to use the hemp for US battleships, to fight for our independence from the Crown.

Until the late 1930’s, industrial hemp was “The Fiber of Our Lives”, it was still mandatory for farmers to grow hemp until the invention of the steam ship.

Between dirty politics, the introduction of synthetic fibers, wood mills (paper mills), and the big oil companies, the production of industrial hemp came to a halt in 1937.

By this time, cotton had already taken the lead in clothing manufacturing. This was due to cheap prices from the use of slave labor that gave cotton an unfair, and unrealistically cheap price. Being cheaper, cotton became very popular worldwide, and people really wanted the softer material that cotton provided at the time as well, cotton’s popularity didn’t end when slavery ended and drove the prices up.

The uses for industrial hemp for fabrics was limited to uniforms, furniture covers, sails, and ropes, etc… In the end, hemp got pushed out of the United States entirely, it was illegal to grow, so there were no more advancements made with hemp in the United States for many years.

Any hemp product has either been imported or the fibers were imported for the item to be made. Now, industrial hemp is making a fast and furious come back. The American public is being offered items that were unheard-of 20 years ago.

With the most recent vote for legalizing marijuana, which affects the legalities of growing industrial hemp as well, 30 states have approved for medical marijuana and 9 of those states approved for recreational as well.

This lifts the limitations of growing industrial hemp in those states, there will be no more need for importing hemp fibers, which should bring down the prices of hemp products really soon, at least I would think. And we can start making advancements on the fabrics and other products that can be made from the industrial hemp plant as well.

What does all of this mean for cotton, “The Fabric of Our Lives”? It just means that cotton has a renewed competitor. Cotton has a good strong reputation on our market, so it will not stop being grown and used, they just have to be ready for competition.

Some Common Uses For Industrial Hemp and Cotton

They both have multiple uses, industrial hemp exceeds cotton, having over 25,000 uses, to cotton’s nearly 100 (this is just a guess, I have found products other than clothing, but no product count), but you can still do more than just make clothes out of both of them nonetheless.

For safe human consumption, cotton seed oil has to be processed to remove the agent called, gossypol, that is poisonous to humans and other animals in large doses. Aside from that it is fairly healthy.

Hemp oil either from the seed or the flower can be consumed as is, after it’s extraction, with no alterations. It is perfectly safe straight from the plant.

They can both be used to make paper that is much better than paper made from wood pulp. In combination of paper production they could put the wood paper companies out of business. This would save so many trees every year!

It is safe to say that both of these plants can be used for more than they appear.

Growing and Harvesting Each

Hemp can be grown in all 50 states if it was allowed. It adapts to the environment around it and thrives, so location is not an issue for becoming a hemp farmer.

You will not need to use pesticides with hemp as it does not attract many if any pest. This is good for the poor honey bee population that is depleting because of pesticides. And weeds don’t stand a chance in a hemp field, the hemp chokes them out and over powers them for sun by growing taller faster.

When growing hemp you do not really need a lot, just the farm land and some help from mother nature and maybe a little water if it doesn’t rain very much. Hemp grows like a weed literally, and matures fast.

Planting hemp is not tricky, it just depends on what the hemp is being grown for as to how you plant it. You plant it very close together for longer stalks and fewer leaves and stems to get more fiber material. If you are looking to get the flowers, you will plant them further apart, allowing for more branches to create more flowers.

There are harvesting machines that cut the hemp low to the ground and leave it lay to dry. This gives nutrients back to the dirt during the drying process when it is done in the field.

The southern states are best for cotton, it likes a hot dry climate, but requires a larger amount of water to compensate. If the cotton is not organic, there are a number of pesticides used in its growth, as pest love the cotton plant.

Cotton plants are planted further apart as they require a little elbow room to grow and mature properly. You have to keep weeding a cotton field or the weeds and grass will steel the nutrients from the dirt, and your cotton harvest will suffer, yielding you less cotton.

It used to be that cotton was harvested by hand, but that has long since been replaced by machines. The picker or stripper, which is the harvesting machine, has spindles that pick and twist the cotton from the burrs. The plants must be removed at a later time.

Texture And Comfort of Each

While industrial hemp is known to be more coarse than cotton, over it’s years of absence in the United States, other countries have been utilizing hemp for some time and have created fabrics that feel quite luxurious.

Most fibers like cotton, use an acid wash to soften them for making clothing, but the acids were found to weaken hemp fibers, so it was not used on hemp. In the 1980’s, a new enzyme-based process was invented to soften the fibers of hemp. This made hemp more pleasurable to wear by itself and easier to blend with other fibers as well.

Blending hemp fibers with other natural and synthetic fibers has been experimented with successfully. You can find hemp blended with silk, cotton, and synthetic fabrics as well. This of course increases the comfort of the hemp and in turn increases the quality of the fiber it is mixed with.

After cotton goes through an acid wash it is soft enough to make fine linen, and comfortable apparel as well. Before being acid washed, it is almost as rough as hemp.

Fabric Attributes of Each

Hemp fabric is far more durable than cotton. This is because the length and thickness of fibers in comparison. Over a short time cotton will wear out and get holes in it, whereas, hemp over a long period of time just gets more and more comfortable.

Cotton is absorbent, but hemp is more absorbent, because hemp has a hollow fiber core. This also allows hemp fibers to dry faster than cotton. Also, it is why hemp is warmer in the winter and cooler in the summer.

When grown organically, they are both hypoallergenic and have antibacterial properties. But, hemp also contains natural anti fungal properties that keep it from growing molds and mildews longer, and helps refrain from holding odors.

So Which One Is Best?

This is going to be one of those personal choices.

I, personally, think that hemp is a far superior fiber. It can be made softer and more comfortable to wear, either used by itself or combined with another fiber. The strength of hemp is unsurpassed by any other fiber known to man, and it’s life span is very lengthy. Or, it can be left all natural and be used for industrial uses, like ropes and canvas’ and such.

To me being so multifaceted makes hemp the superior plant to the cotton plant all together. I’m not say that cotton should stop being used, I am just saying that I think hemp is superior and should be used in more applications.

I would love to hear your opinion on this subject. Please feel free to leave a comment below and I will get back to you as soon as possible.

As always, thank you for reading my article.

Tags: # is hemp better than cotton, #hemp, #hemp vs cotton, #is hemp superior to cotton